Fayjeura & Kinoala are two neighbouring kingdoms on an island called Drakace. The kingdoms are usually at peace with one another, although sometimes they war under the influence of the dark gods. 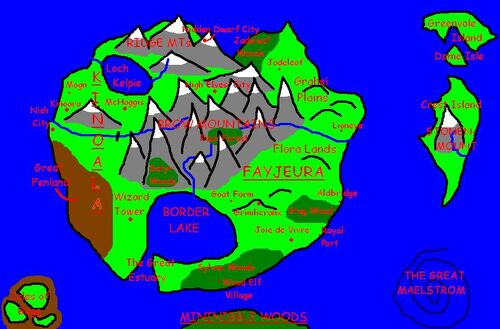 Fayjeura is rather grassy and hilly, containing the massive Brow Mountains and Border Lake that barrier it off from Kinoala. It contains a few forests that humans usually keep a away from due to monsters and other races of people (eg. goblins or wood elves). Its capital city is Joie de Vivre, which is Franquian for 'joy of life'. And it is a rather pleasant city. It has no other cities but its biggest town is called Grimlicranx (which is a dodgy place).

King Alron of Fayjeurahas complete and total political power, however, his grandson and granddaughter Prince Erri and Princess Aria take over fairly if Alron is absent. However, there is also a senate to aid the Royal Family in their judgement.

There are only three members of the Royal Family due to its last crown prince and princess and the Queen dying from a plague. However, old King Alron and his teenage grandchildren Erri and Aria still live. Erri is Crown Prince because he was born two years before his sister.

Kinoala is overlooked by the foreign countries for some reason. Its people speak with a bit of a Scottish accent and generally are quite burly and muscular, men and women. Kinoala contains a smallish mountain range called the Ridge. Kinoala only has a few towns and cities due to the amounts of monsters there (many Kinoalans emmigrate to Fayjeura or one of the nearby islands). Its capital city is Kinoara, but its biggest city is McHaggis.

Allies of the Fayjeura & Kinoala include: Franque, Espania, Grecia and the nearby Greenvale, Dome and Crest Islands.

Humans: The main race, all around in magic and fighting. You're probably one.

Elves: Svelte, tall humans with pointy ears. There are four types in the kingdoms: Wood elves; bronze-skinned elves who live in the Sylvan Woods, high elves; who live in their well-defended stone city directly between the mountain ranges, dark elves; who are evil blue-skinned elves who live in caves under the Sylvan Woods, and sea elves, who are green skinned with gills and finlike extensions on their arms and legs who live under the oceran but can surface for short amounts of time.

Faerie: There are many kinds of faerie and most humans don't believe in them. The main Fayjeuran and Kinoalan kinds are flower faeries, pixies, sylphs, undines, brownies, boggarts and gnomes.

Orcs: A rugged, warlike race that look like hardy, tall humans with dark green skin and small horns. Live in tribes in a few of the kingdoms' forests. Are relatives of goblins and ogres.

Goblins: Small, gangly humanoids related to orcs. There are a few sub-races: green-skinned goblins who share their name with the whole species, yellow-skinned violent redcaps wear red hats and have constant bloodlust, firegoblins are red-skinned and are all skilled pyromancers, and the small, mischievous hobgoblin; goblins with very light green skin who are powerful mages.

Ogres: Huge green orclike creatures who live in the Sylvan Woods. Are said to be a cross between giants and orcs in old mythology. Live alone in slimy, skull-filled caves but sometimes join together to fight wood elves, just for fun.

Dwarves: Used to live on Drakace Island but left when the humans started to explore the Brow Mountains. Now few live on the island, if any. Most now live inside the mounatain Stonenmount on Crest Island or have allied with the Vikings of Vikenhelm.

Fauns: About a hundred live in a tiny forest in the middle of the Brow Mountains. They are humans with a goat's legs, hooves, tail and horns. Are very friendly and hospitable, and they happily share their small woods with the animals. Have hot springs in their woodland village. Come male & female.

Nymphs: Drakace Island only has two kinds: dryads of the trees and naiads of the fresh water sources (ponds, rivers, lakes etc). Hardly any remain since soldiers started cutting down trees to make siege onag and dumping their waste in the water instead of burying it. Only come female.

Satyrs: Pretty much the same as a faun only with curlier hair and longer horns. Are more 'wild' than fauns. They love panpipes and harvest festivals. Only come male (to repreduce they marry nymphs). They live in woods to the Kinoalan side of the Brow Mountains.

Centaurs: About fifty remain. They share the satyr's forest and are half-human, half-horse. Are quite mysterious...

Harpies: Like huge, manky black vultures with an ugly women's heads. Have taloned front limbs with opposable claws as well as wings. Live near the sea, eating undines (sickos!), unfortunate sailors and fish.

Sphinxes: There are 2 kinds: Grecian and Osirian. They have a lion's body, a snake's tail and a human's head, usually a woman's. The Grecian ones have wings too. They all love riddles, such as the famous riddle "What has four legs in the morning, two legs in the day and three legs in the noon?" If you get the riddle wrong, then THEY KILL YOU!! Only one, a winged Grecian one, lives on Drakace Island, in a cave in the Brow Mountains.

Zoltrixes: A zoltrix is a huge, purple vulture with white wing and tail fathers and a bald head. Are very territorial! Live in the eastern Brow Mts and Grahsi Plains. Eat humans, wolves and mountain goats.

Sewer beast: Sewer beasts are huge furry things with tusks that inhabit the sewers under the town of Grimlicranx. They feed on humans and the abnormally large rats that fester down there.

Chuckerels: Huge chickens with tiny arms like dinosaurs'. These arms have no purpose whatsoever. Chuckerels have flightless wings too. These useless limbs make up for ridiculously powerful legs, however. A single kick from a chuckerel can kill you, and the birds can also jump extremely high. To move they hop along the ground like a kangaroo. They also have beaks like huge knives for skewering people and mountain goats on.

Cockatrices: A cockatrice is a half chicken, half dragon-thing. These look like large, lanky chickens with a webbed crest in place of a plume, a toothed beak, fanlike wings, dragon's legs and a prehensile, whiplike tail. Their breath is deadly poisonous. Cockatrices die at the sound of a rooster crowing. They are created by a chicken laying an egg and then a snake taking care of the egg. Chickens and snakes are the only living creatures that a cockatrice won't try to kill.

Basilisks: An ugly snakelike creature with eight legs and a webbed plume on its head and down its spine. Basilisks have the power to turn you to stone just by looking you in the eye. They live in cold caves under the mountains or desert, only leaving their lair to hunt. For some reason, their stone gaze doesn't work on weasels. One way to defeat the basilisk is to have your immune weasel bite it to death. The easier way to defeat one is to have it look in a mirror (then you get a cool basilisk statue).

Sea serpents: Long, winding serpents that live in the sea and snack on fish and ships. (Geddit? Fish and ships!) There are many species. Their king is called Leviath.

Worms: Huge varieties of the worms that burrow through soil or humans. Worms are huge, with teeth all the way around their mouth. They just kill with those teeth, though. Its the teeth on their mouth-tongue that eat their poor victims. Are genderless, and come in greeen and pink colour varieties. Live under plains or mountains.

Griffins: Even less live on the island than dwarves, but since allying with the kingdoms many have flown over from foreign lands. Are half lion, half eagle and hate horses for some reason. Can talk and/or write using runes, like the dragons. Some old ones can use a bit of magic.

Pegasi: Winged horses from Grecia who fly to Fayjeura & Kinoala to migrate. Are overly friendly and easy to tame, which isn't such a good thing because more and more bad guys are using them as steeds for their evil henchmen. Can't talk or write (they have hooves!) but are very intelligent and can understand human speech. Their own language is called Bray.

Unicorns: The second rarest creature in kingdoms, look like a white horse with a golden horn, a goat's beard in males and golden cloven hooves. Also have a golden mane and tail. Only fifty are said to be alive due to overhunting many years ago for their coveted horns that can cure any poison when ground and mixed with holy water. It is unknown if they can talk or use magic. What is known, however, is that the prefer girls to boys because they think a boy will harm them.

Benu: The Benu is the last phoenix alive on the island. It is often thought of as a god, and it watches over animals to protect them from harm. It looks like a golden crane with a crest, tail and wings of fire. The fire doesn't burn, however, instead it heals you. The Benu is said to live in a nest of incense on top of the tallest mountain in the Brow Mountains.

Retrieved from "https://conmyth.fandom.com/wiki/Drakace_Island?oldid=10537"
Community content is available under CC-BY-SA unless otherwise noted.