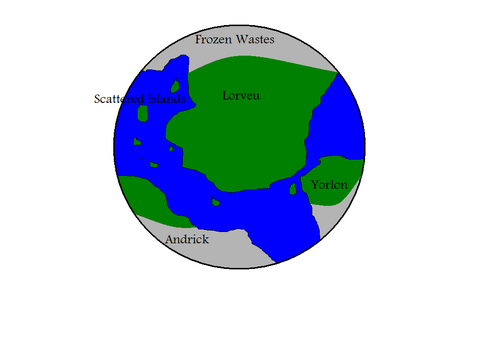 Baltos is a strange planet, where beasts rule mighty empires and humans run in primitive tribes and clans. Three main beliefs of The End and Beginning - peace achieved through war, peace achieved through religion, and peace achieved through economic power - are strong influences to the populace of Baltos. However, there are more beliefs, somewhat smaller than the main ones, that influence smaller tribes, villages, and clans. Order is not common among the beast races that rule the empires on the mainland, called Lorveu, and so crime, riots, and other types of problems are widespread. As a result, some population has declined on Lorveu and has moved to either Andrick, Yorlon, the Scattered Islands, or even the Frozen Wastes. The beast race for which the planet was named after, the militant Baltos, rule Lorveu on Baltos Island, while the peaceful and religious Arkan rule Andrick, and the economically-minded Chalte rule Yorlon. The Scattered Islands and the Frozen Wastes have yet to be claimed by a sentient. 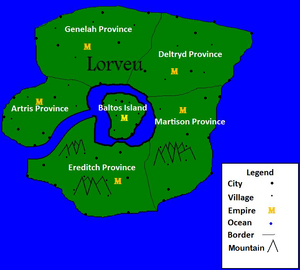 Lorveu consists of mostly flat or almost-flat land, mountains rare in the north and dominating mostly the southern parts. Baltos Island, where the militant Baltos for which the island is named after, rule their empire of warriors. There are five provinces, excluding Baltos Island, which is not considered a province, Genelah Province, Atris Province, Deltryd Province, Ereditch Province, and Martison Province. The Genelah Province is quite peaceful and is home to religious tribes, villages, and clans. The Artris Province is home to many fishermen and hunters, as, as legend says, the region is home to the Arktris, magical beast gods disguised as trees with the ability to exert a siren song to animals, populating the region with an abundance of beasts, making the Artris Province the continent's agriculture capital.

The Deltryd Province is the primitive land, housing primitive races such as humans, Lorkus, and others. The Ereditch Province is the economic capital of Lorveu as the land has an abundance of gold underground. This brings cash infusions to supply the land and go through trade. The Martison Province is the war-ravaged land, responsible for producing militants and mercenaries and war machines. However, it is also the most crime ridden in all of Lorveu. 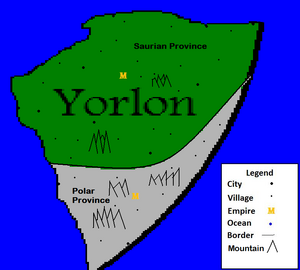 Being one of the smallest continents, Yorlon has two distinctive provinces - The Saurian Province and the Polar Province. The Saurian Province has rare mountains stcking up near the southern and central plains. It is home to peaceful and religious races, the most powerful sentient amongst them the Arkan. Villages dot the countryside and cities are closer to the water, being major ports for trade. The Polar Province, as the name suggests, is extremely cold. Rarely, cities are there, and if so, they are port cities, again, as ports for trade. Villages dot the land and are closer to the more abundant mountains in the Polar Province.

The Arkan are relatively peaceful and only hunt animals if the time arises for food, as they are carnivorous. But at any other time, they would rather respect Nature and not take too much from Her, rather obtaining food via trade from other lands. As a result, wildlife are abundant in Yorlon and many animals have been tamed and domesticated as pets. 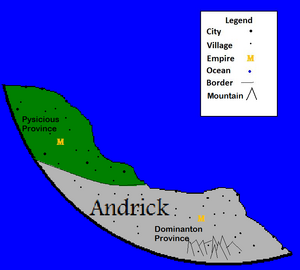 Andrick is home to the wealthiest government in all of Baltos. It is the central powerhouse that is the start point of all trades, whether trading in agriculture, minerals, or other important commodities. No one has ever waged war on Andrick in all history, because they know that the trades would end that their country would fall into chaos.

Beliefs of The End and BeginningEdit

Main Article: The End and Beginning

There are three beliefs, from the three gods, of the process of The End and Beginning.

Retrieved from "https://conmyth.fandom.com/wiki/Baltos?oldid=13783"
Community content is available under CC-BY-SA unless otherwise noted.